This post is a follow-up to those related to the commissioned piece for MU’s GSS this year: A Glorious Sounds Celebration by composer Kenneth Lampl. [See https://gemmell-posts.com/2016/11/11/blog-post-title-2/  and https://gemmell-posts.com/2016/11/11/blog-post-title-3/ ]  This commission was highly successful. I sent Ken a brief description of our preparation and performance:

“Students enjoyed the piece from the get-go! At first, they thought (because of the number of pages) that it was going to be a lot of work, etc., however, after the initial run-through, they noticed the amount of repetition made it very possible to learn in a short period of time. The accessible nature of the musical material allows the FUN to happen quickly. The tunes are just right! Enough zip in #1 (“A La Media Noche,” Puerto Rican Carol) and #3 (“Wahamba Nathi,” African Gospel Song) to get the energy going, and enough uniqueness in #2 (“Mi Yimalel,” Traditional Chanukah Song) to make things interesting. Students really ENJOY the entire piece!!! Choirs learned it first; that’s where I actualized my interpretation. When working with the instrumentalists, I was able to transfer the learning to them with some adjustment of dynamics and articulations to match the choral material.

“For #2, after the full and rich intro (super-Romantic, like Brahms), most values in sections in major are shortened (staccato) like on your MP3, except the long sustained notes that play the counter-melody. The “Shma!” section provides an amazing contrast, with the modal lines and super-legato singing — so beautiful and musical! The final section of #2 is so major-motion-picture-soundtrack-like that it provides a wonderful and dramatic conclusion. Most difficult assignment for the students was memorizing the Spanish and Hebrew (Spanish is easier)!!

“#3 begins with the energetic drumming of Percussion Ensemble: the director (Jim Armstrong) really understands the style, etc., and has creatively added a bunch of stuff. Of course, it’s really cool, and when the choir/orchestra enter, they’re psyched!! Sounds great w/the layers of additional instrumentation layered on top. After the middle drum break, when the choir goes to English, all accompanying forces drop out and the choir sings a cappella w/claps on the half notes for “Today is Christmas!” This is particularly effective with the even distribution of voices around the hall. Instruments return and this time, as instrumental layering occurs in the orchestra, brass instruments stand, play and dance as they enter — it is so wonderful!! In the meantime, other wind/brass players and percussionists have been added in the hall, and the choir (already surrounding the audience on all sides and clapping and dancing) begins a “washing machine” movement in the aisles, rotating playfully w/each other as they clap (and getting the audience to clap) and singing their hearts out!!! It’s really “a glorious sounds celebration” indeed and reaches a climax that you wouldn’t believe!! It’s like an organized pandemonium of humanity and joyfulness (reminds me of the final original “Star Wars” after the Dark Side is defeated or the end of “The Matrix” series). To add to the technicolor aspect of the entire thing, lights are going wild all over the hall, with blinking, moving, color, you name it — everything we’ve got!!!! — and it’s so delightfully crazy! Wow is the word!!! After the concluding sustained chords, with a drawn out fermata w/crescendo and percussion rolls at the end, the hall goes completely black — Pow!!!! The audience, having not clapped for the entire concert in order to create seamless musical transitions, begins to show their appreciation. . . but wait. . . lights come back on and Handel’s “Hallelujah!” begins in the orchestra. I turn around, gesture for the audience to stand, and say: “Now it’s your turn!!” This ultimate, final sing–along concludes the concert and gives us an automatic standing ovation.”

Fortunately, percussion instructor Jim Armstrong has provided a cellphone video of #3 which, though sound quality/mix is not great, does give you an idea of the “surround sound and visual excitement” of the project. It’s particularly thrilling to have a COMBINED choral and instrumental union envelope the audience, which definitely added to the energy and thrill of the experience! Enjoy this video – thanks again, Jim! – and allow the smile to invade your face. What a glorious way to burst into the holiday season! 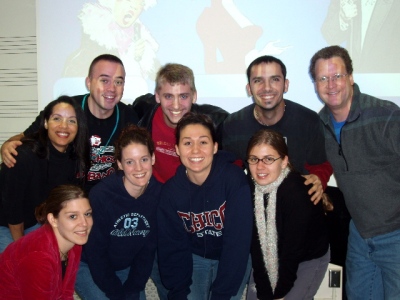 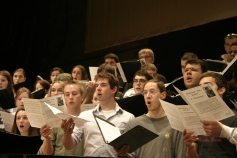 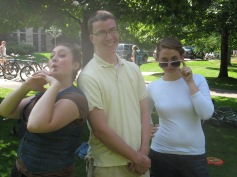 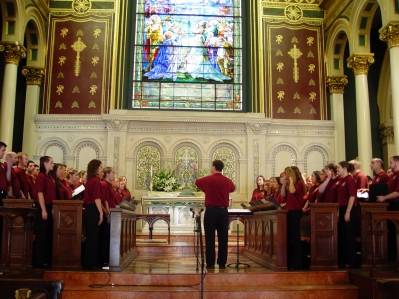 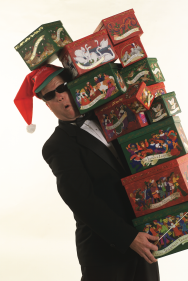 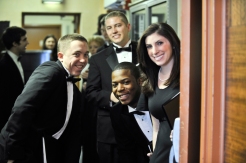 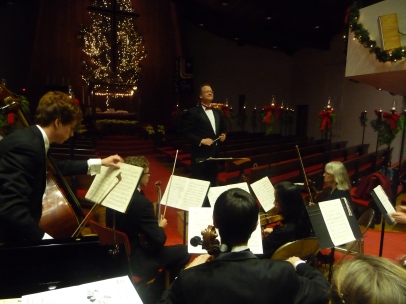 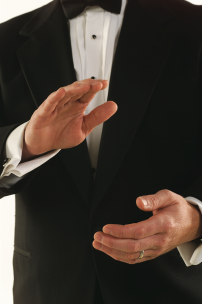 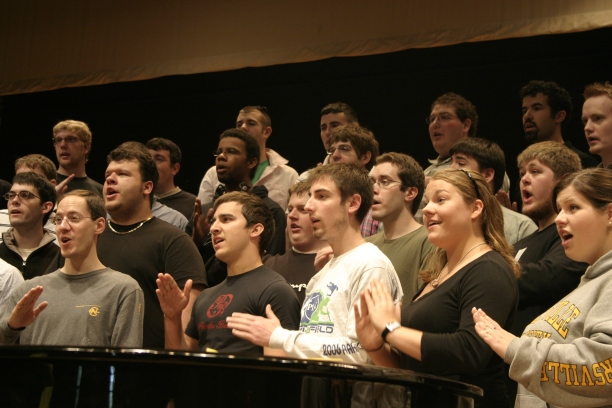