On Sunday afternoon, November 12, 2017, I conducted a concert of Moravian Music at Church of the Loving Shepherd in West Chester, Pennsylvania. The concert was performed by members of the church’s choir, guests from the Lititz Moravian Senior Choir, a string quintet of students from West Chester University, Kathleen Scheide (organ) and Barbara Prugh (trumpet). Thanks to everyone who made the concert such a success!

Hello, everyone, and welcome to this concert of Moravian music. You might be asking: “So what’s it mean to be a Moravian?” To most people, if the fact I’m Moravian ever comes up in polite conversation, the typical response is: “Oh, are you all related to the Mormons?” To which I immediately respond: “Oh, no, definitely not!” Or, especially in Lancaster County, I often get: “Did you say you’re a Mennonite?” And again, I have to quickly respond: “Oh, no, definitely, not…we’re not connected!” And, while Moravian, Mormon, and Mennonite all begin with “M’s” . . . and we are all Christian…that’s about as related we get!! And, of course, most people are familiar with the Moravian star, or Moravian sugar cookies or maybe even Moravian sugar cake, . . . but there’s definitely more to being a Moravian than these things. To help make this concert of Moravian musical gems more meaningful to you, I’d like to briefly introduce you to the history and nature of the Moravian Church and its beliefs. In context, you’ll better understand the spiritual foundation, motivation, and inspiration that have resulted in our long and rich musical tradition.

More than 100 years before Martin Luther published his 1517 reforms to launch the Lutheran Reformation – celebrating its 500th birthday this year – an earlier church reformer, Czechoslovakian priest Jan Hus (anglicized, John Hus) was burned at the stake at the Council of Constance in July 1415. His crime: Hus had failed to recant his controversial teachings of the time, most notably, that the authority of the Bible was higher than the Church or the Pope, and that the Bible – and worship services – should be in the language of the people. Pretty radical, huh? Forty-two years later, in 1457, the Czech followers of Jan Hus formed an organization known as the Unitas Fratrum (or Unity of the Brethren). During the 30 Years War, the church went “underground” under the leadership of Bishop John Amos Comenius, considered “the Father of Modern Education.” The church was reborn in 1722 as refugees from Moravia and Bohemia found a home on the estate of Count Nicholas Ludwig Von Zinzendorf – a Lutheran – living in Herrnhut, Saxony. Zinzendorf was captivated by the Moravians and eventually became a bishop of this renewed Moravian church. In 1732, the remarkable history of worldwide Moravian missionary work was established with the first two Protestant missionaries traveling to St. Thomas in the eastern West Indies to preach to the slaves there. In 1735, Moravians sent colonists to America, where an initial settlement in Georgia was unsuccessful, and in 1741, permanent settlements were established in Nazareth and Bethlehem, PA. The primary goal of these early settlements was to minister to the Native American Indians. Other 18th-century settlements followed, including Lititz, PA, and its church the Lititz Moravian Congregation (where I’m currently the Director of Music Ministries, by the way); and a “southern province,” was established in Salem, now Winston-Salem, North Carolina. Throughout the world, especially in these formative years, Moravian settlements were remarkably similar. A quick look at Lititz provides a clear example.

The Lititz Moravian Congregation was organized in 1749 and included local farmers “awakened” by the preaching of itinerant Moravian ministers. The Moravian motto, “In essentials, unity; in non-essentials, liberty; and in all things, love” was appealing to settlers in Lancaster County. Inspired by the Moravian settlements in Bethlehem and Nazareth, a 491-acre farm was offered for settlement in Warwick Township in 1753. In 1756, the village was laid out with streets and lots, and the name “Litiz” was given to the new community. For nearly a hundred years, until 1855, Lititz was a closed community where church members built their homes on land leased from the church. Church fathers directed the religious, cultural, social, and economic life, intending to provide a religious environment free from “worldly influences.” Music has always been a central activity of the Moravians. It is said that in colonial America, the best place to hear Bach, Mozart and Haydn was not in New York or Philadelphia, but in a Moravian church. The tradition of music as central to worship continues today at Lititz Moravian. A tremendous variety of musical styles and genres is performed regularly through our congregational singing and the work of several choirs, including a Senior Choir, Junior Choir, Handbell Choir, a brass ensemble called the Trombone Choir, a contemporary praise band known as Glory Be Good, and a resident orchestra composed primarily of church members.

Most of the music you’ll hear this afternoon is very well known and quite popular in Moravian circles. With a decided emphasis on works from the late 18th-and early 19th-centuries, a period known as a “golden age” of hymn and anthem composition by Moravian composers, you’ll immediately notice a compositional trend that is simple, clear, sweet sounding, and lovely – all as a means to express the spiritual nature and primacy of the texts through quality musical craftsmanship. In the hymns, full participation from everyone is encouraged, as it is through four-part congregational singing that a representation of unity is heard: the creation of harmony – spiritually and musically – requires the combining, the coordinated coming together, of separate voice parts and diversified spiritual journeys in order to form a unified expression of the heart and mind. As Zinzendorf wrote: “The hymnal is a kind of response to the Bible, an echo and an extension thereof. In the Bible one perceives how the Lord communicates with people; and in the hymnal, how people communicate with the Lord.” [Moravian Book of Worship, 1995, p, iii]

Composers sought to write accessible church works – hymns, anthems, solo songs, duets, organ works, etc. – as a means to employ music as worship. I invite you to experience our concert in a similar vein today, as we emulate a traditional Moravian service called a “Singstunde,” translated “Singing Hour” or “Singing Lesson.” For this service, music and texts are selected according to a central theme – in this case “Moravian Music” – and assembled, performed, reflected upon, and ultimately used as a vehicle for praise and prayer. Hence, we’d like to ask you to withhold your applause until the conclusion of the program.

It seems appropriate to conclude my remarks with a paragraph that has introduced every Moravian hymnal since 1789:

May all who use [this music] experience at all times the blessed effects of complying with the Apostle Paul’s injunction in Ephesians 5:18-19, “Be filled with the Spirit, as you sing psalms and hymns and spiritual songs among yourselves, singing and making melody to the Lord in your hearts.” Yea, may they anticipate, while here below, though in a humble and imperfect strain, the song of the blessed above, who, being redeemed out of every kindred, and tongue, and people, and nation, and having washed their robes, and made them white in the blood of the Lamb, are standing before the throne, and singing in perfect harmony with the many angels round about it, “Worthy is the Lamb that was slain, to receive power, and riches, and wisdom, and strength, and honor, and glory, and blessing, for ever and ever. Amen!” [Moravian Book of Worship, Ibid.]

Congregational Hymn: “Join We All with One Accord,” Gaudeamus Pariter, Roh (1544) 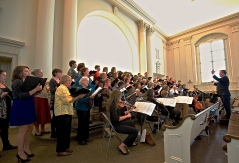 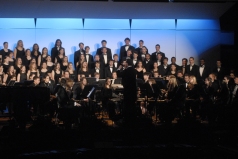 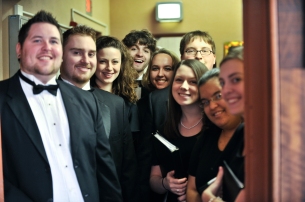 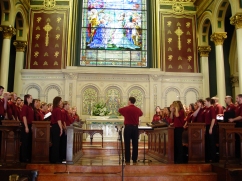